We decided on a mermaid theme this year since my daughter’s favorite time is bath time. We actually got a large above ground pool to use and have a “under the sea” party but that didn’t really work out. (My husband got very sick and didn’t get well until a few days before the party so we couldn’t put up the pool.) However once he was finally feeling better we decided on making a home made slip ‘n slide.

It was a HUGE hit! We used Large sheets of plastic from Lowes, pool noodles for sides, cut down wire coat hangers for stakes and at the bottom another roll of plastic and hay bales for the catch pool. We have a naturally sloped yard so with some baby shampoo and water it was ready to go. We had 15 kids and 2 adults try it out and it held up great!

Once everyone was pretty much exhausted we headed inside for cake!

The ombre mermaid cake was made especially for the Birthday girl. I made my own fondant using Wilton’s recipe about 5 days before the party. I separated the one batch into 3 balls. Then added a different color blue to each one and rolled them up tight in saran wrap. On Friday, (the day before the party) I baked two 6″ circle cakes. While they were baking I rolled out the fondant and made my mermaid “scales”. I used the opening of a Wilton decorating tip like a cookie cutter. After the cakes were cooled and had been in the freezer for 20 minutes I stacked them, then I “dirty iced” them. (Which means a thin layer of icing, nothing pretty. It’s being used as a glue for the scales.) Then I started applying the scales into I got to the top. Now being completely honest I hadn’t thought this far ahead so when I got to the top I was pretty unhappy. Luckily my husband said “Add sand” and he saved the day. So I added a bit more icing to the top since it started drying out and while it was still wet I threw on some sand. I also had some pearl sixlets candy that I added and those were the Birthday girl’s favorite part. The number 3 candle came from Wal-Mart.

(Scroll to the bottom for the Sandcastle Cake tutorial. I featured it separately.)

Since the party was at 3pm we didn’t do lunch but I did lots of snacks.

Fruit- The fruit was just a medium sized watermelon that my husband cut into a “pail” shape and hollowed out a bit. Then I used cookie cutters and cut out honeydew, cantaloupe, & watermelon. Then I used the scraps and cut cubes and added them all in. I had some blueberries and grapes and threw them in too. In another picture you can see the grapes threaded onto a bamboo skewer. We labeled them ‘seaweed grapes’.

Cookies– You can see the sand recipe came in handy again as a bed for the sea star cookies.  I cheated and used refrigerated cookie dough and rolled it flat. Then I cut out my shapes and baked. Once cooled I used this recipe http://www.sweetsugarbelle.com/2011/07/outlining-and-filling-cookies-with-royal-icing/ for the icing. It was really yummy and I had lots left over.

Sand Pudding- The sand pudding was the sand recipe once again (Again I made one giant batch and used it for everything) and a pudding recipe. http://manouvellemode.blogspot.com/2011/08/sand-pudding.html I used her pudding recipe and then just layered each one over and over.

Sandwiches- The peanut butter & jellyfish sandwiches were just regular sandwiches and I cut them out using the same cutter I used for the cookies. My husband sure enjoyed eating the scraps from these.

Jellyfish juice-   Using 2 packages Blue Raspberry Lemonade unsweetened kool-aid follow the directions on the back. Once mixed add two frozen Pina Colada Mixes and stir well. Then fill to the top with Sierra Mist. I think I used about 1 1/2 cans. If you are using a container like mine you need to strain it because the Pina Colada will clog up the spout. If you are using a pitcher to pour it then you can half the recipe if needed. I used recycled Starbucks glass bottles to drink from. The water bottles to the side were Deer Park brand that I peeled the label from. Then I downloaded a water bottle template, inserted my clipart from Etsy, printed and attached with packing tape.  I refrigerated them until right before the party.

Veggies- I will tell you no one in my family is really “veggie” people. However I know many people are so we used cucumber and carrots for our “sea cucumbers” and “crab legs”.

There are a few things you can not see much of in these pictures. The large white bowl held Pirate’s booty, the Cheetos were labeled Mermaid Munch, the cheese triangles were Shark Teeth. To the right of the center picture you can see the sand dollar cookies. Again I cheated and used refrigerated dough that I rolled into balls and pressed flat. Then I added 5 sliced almond pieces to the center and sprinkled them with cinnamon sugar. They looked just like sand dollar’s and they were delicious. There was also a clear bowl full of gummy sharks. In honor of shark week it was labeled Shark attack.

Cupcakes- I loved the mermaid tail idea when I first saw it on Pinterest. http://mrsdork.blogspot.com/2012/01/mermaid-tail-cupcakes-tutorial.html I just knew this is what I was going to use for the whole party. However after making my first batch I knew that I was going to need to have a plan B.  2 of them broke and honestly it just took forever to pipe them all out. Maybe if I had made the tails much earlier I would’ve been in a better position but as you can see I had a LOT on my plate and just didn’t have the time. I printed out 6 templates to a page and made 4 pages. I had 12 survive. So I made those 12 and using my sand again I whipped up 12 sandy ones also. I made the seashell candy molds in advance and truly forgot about them so I was glad to incorporate them in too.

I had one happy little mermaid!

While planning my daughter’s 3rd birthday I decided upon a mermaid theme. I immediately knew I wanted to make a sandcastle cake. Browsing around online I found some really cute pictures and only one had instructions. (http://www.livingwellspendingless.com/2013/06/12/how-to-make-a-sandcastle-cake-tutorial/) I liked her ideas but I also tweaked them a bit. See below: 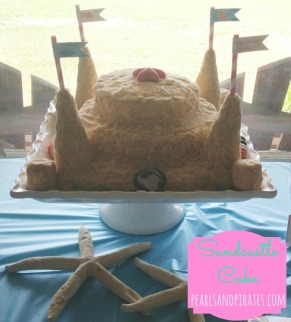 I made a large batch of sand for the cake, sand pudding, cupcakes, and I used it on the plates to sit the cookies on. I made up my own sand recipe because I found that graham crackers alone tasted like cardboard. I don’t own a food processor but my blender has a “crumb” button and that worked pretty well.

I used a 10″ well greased square pan for the bottom layer. My tips are I always use Wilton brand bake even strips and tap the cake pan a few times before baking. Once it’s cooked let it cool in the pan for about 10 minutes and then tap it out onto a cooling rack, wait another 20 minutes. Then I transfer it to the freezer for 20 more minutes. (This helps the cake stay together. Ever iced a cake and it falls apart? Not anymore.) Then I put it directly on to my cake server. The other two layers are 8″ & 6″ circles. I stacked all 3 levels before I iced them because I wanted the icing to be “tacky” so it would hold the “sand”. Once they were stacked and iced I applied the sand. I found this was probably the most difficult task and it really wasn’t that hard. I sprinkled it on, threw it on and tapped it on. They all worked! I used sugar cones and marshmallows as embellishments also done the same way. I cut the tips off the cones and put in the straws. They helped the cones stay on a lot better too. I also added “flags” to the straws that matched our theme. At Michael’s I found blue rock candy and sprinkled some around the base mixed with sand so it looked like sea glass. Also about a week before I made chocolate shells with a mold also from Michael’s. They were pretty easy and I refrigerated them until needed. I made all the rest the day before and wrapped it in saran wrap overnight. It truly was the highlight of the party. Nobody wanted to cut into it because it was so beautiful.